Carrying Testimony from Generation to Generation was developed to ensure students continue to learn the history and lessons of the Holocaust through meaningful personal connections to Survivors and their descendants.

Over the past 20 years, bearing witness to the Holocaust through Survivor testimony has played an integral role in Holocaust education for students and adults alike. The United States Holocaust Memorial Museum Guidelines for Teaching About the Holocaust states: “Precisely because they portray people in the fullness of their lives and not just as victims, first-person accounts…add individual voices to a collective experience and help students make meaning out of the statistics.” The Yad Vashem Resource Centre says, “In recent decades, worldwide recognition of the importance of survivors’ testimonies has become widely recognized as a central source for understanding the Holocaust.”

This program is designed to enable continued education in the powerful format of first-hand testimony, but in the absence of the Survivors themselves.

The time has come for the descendants of Holocaust Survivors to take on the responsibility of keeping Holocaust history relevant and powerful in the generations to come.

These descendants of Survivors have grown up in the shadows of the Holocaust. Many have visited Europe with their parents and grandparents, to learn their families’ histories and connect on a deeper level. Some have heard their parents or grandparents share this history both formally in presentations and informally throughout their lives. Their connection to Holocaust history is built into their DNA.

In this program, descendants of Survivors share their families’ personal histories with students and other audiences using their own voices, first-hand video testimony from a filmed personal interview with their parent or grandparent who survived the Holocaust, artifacts, photos and their own personal history of growing up in the shadows of the Holocaust.

The core of the concept is the interview. Clips from the interview are used during the presentation and they provide the evidence that the descendant has become a witness.

As Elie Wiesel said, “When you hear a witness, you become a witness.”

In addition to validation, the clips allow the Survivor to continue to share his/her most powerful personal memories and thoughts with the audience while the child or grandchild is able to reflect on the long-term impact those experiences had on the Survivor and his/her family. The audience develops an emotional connection with both the Survivor and the descendant, making the history more meaningful and memorable.

“You hear what happened in class but [it’s] the emotion and manner that was presented … in my opinion, that gives us a better respect and understanding of the terrifying event.”

“I thought that it was really engaging and informative and I really enjoyed learning about Bill Glied’s story.”

“I thought it was really powerful to see the videos and hear from someone who had a very personal connection to the Holocaust. It provided some much needed reality to the situation because a lot of the time in class, the entirety of the Holocaust can seem almost unbelievable and often times I can’t wrap my head around the atrocities of Nazi Germany.”

“I found that I learned more about the Holocaust by listening to her presentation as I was listening to a real example of someone’s life, than I would have in class.”

I liked that even though we didn’t hear first hand from the survivor for most of it, we still heard it from someone who was affected very strongly by it.

“I thought [her] presentation was just right. It captured Bill’s story and legacy perfectly, not to mention their own relationship… I would be thrilled to have her back both semesters next year if she can fit it in.”

“This is an excellent alternative when the Survivors can no longer speak. It is very impactful for the students to hear the story from the perspectives of the children of the Survivors and what they went through.”

“For [the students] to hear first hand from the Survivor’s family and connect on a level that we can’t have in the classroom in a video that we present ourselves is instrumental for the students to experience and connects them to the material.” 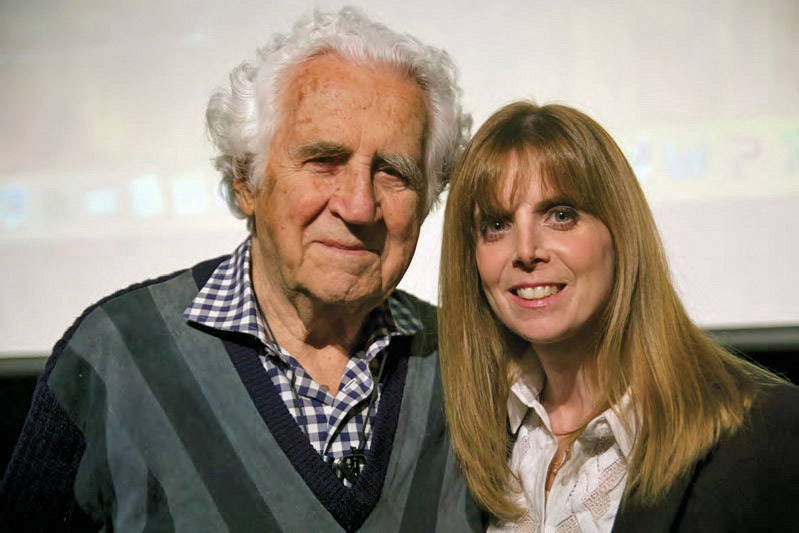 Carrying Testimony from Generation to Generation was first founded in 2017 by Bill Glied z”l, a Holocaust Survivor, and his daughter Michelle Glied-Goldstein. They saw the impact of first hand personal Holocaust testimony and believed it was an important part of Holocaust education. They set out to find a way to bring the tremendous value of that personal testimony into the next generations. For over two decades, Bill had devoted his life to sharing his personal Holocaust history with students and adults in schools, libraries and religious institutions, at the Neuberger Holocaust Centre, on over 8 trips to Poland on March of The Living and on Educator Tours. He shared his message of hope and optimism for a better future. Michelle has also been involved in Holocaust education, both as a docent at the Neuberger Holocaust Centre since 2011 and as co-chair of Speaker’s Idol at Canadian Friends of Simon Wiesenthal. In collaboration with Bill and Michelle, Catherine Gitzel, a passionate Holocaust educator, helped establish Carrying Testimony from Generation to Generation. Our growing team of dedicated presenters are available to continue sharing their families’ histories with you and your audience.